Battle of the breads: Which Paleo bread will rise to the top? 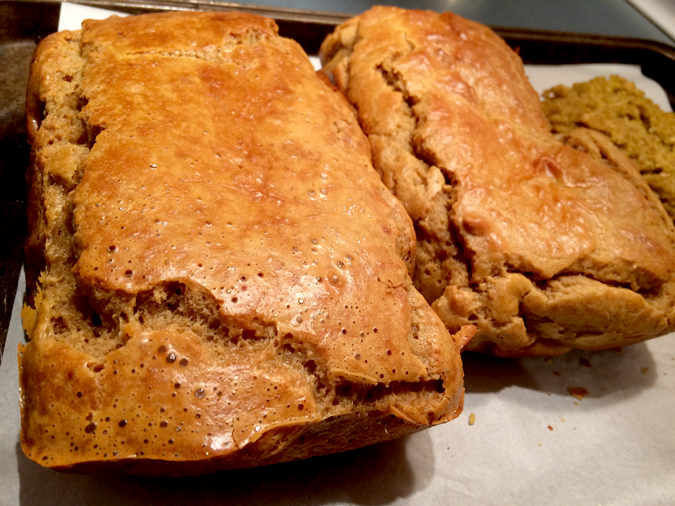 I’ve been on a hunt.  A hunt for the most gluten-y tasting sandwich bread that is actually Paleo. Darn near impossible, I know.

Up until now I’ve been happy with the store-bought gluten-free version of bread. But, now that I’m trying to avoid preservatives and almost all grain, it just wasn’t cutting it.

So, I decided to be judicious and try four different recipes that weren’t  too expensive to make. All four actually worked out to be less than the store-bought loaves I usually grab, so a step in the right direction! 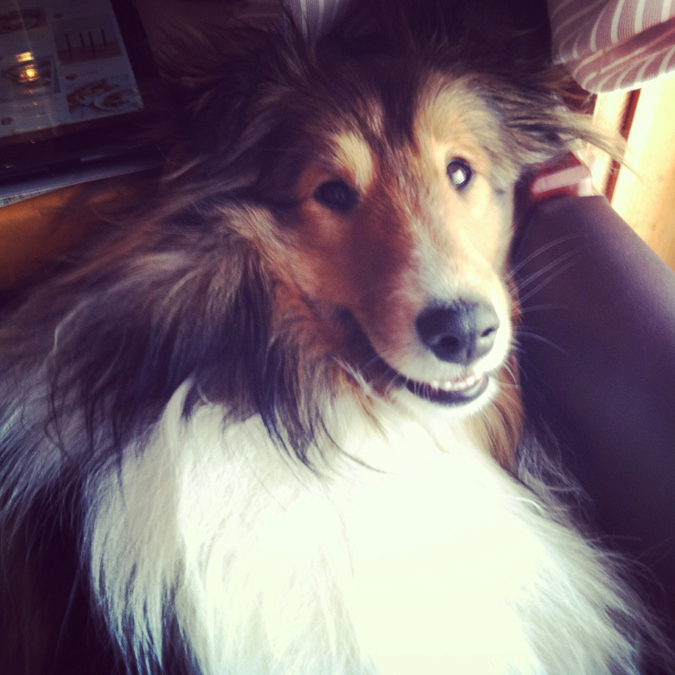 First up: a recipe from Purely Twins.  The only ingredients are plantains and eggs, so I thought I would start with the easiest one.

The photos on the website looked spongy, but normal.

Eh. I’m not sure what went wrong, but mine came out gritty. Perhaps it’s the fact that it calls for 7-8 oz of plantains, and mine were just cut up really small but not smushed? It didn’t specify how to cut or measure them exactly. 😉

There’s also a video on the page, but I hate watching video tutorials. Who has the time?

Still edible though! Just really thin. Perhaps they’re meant to be put on a cookie sheet and not in a bread pan?

You really could put maple cream on anything and it would work miracles. 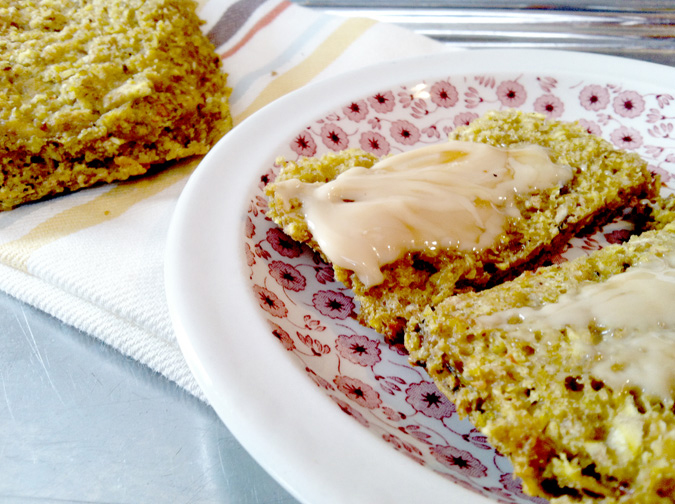 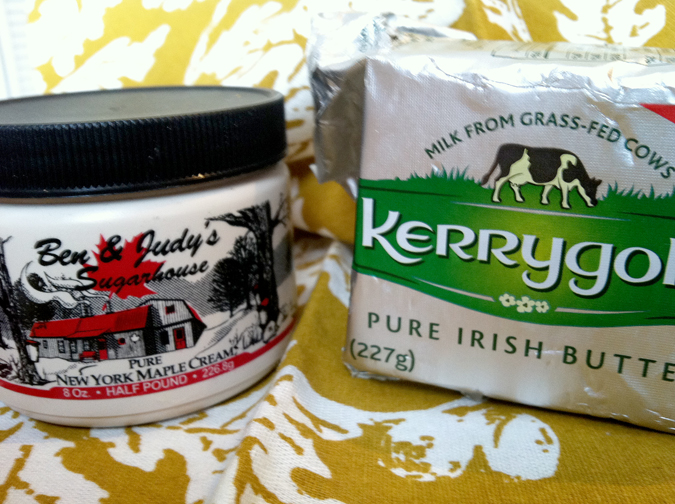 The butter we will save for another one.

Next up: a recipe from Paleo Grubs.

This one is a more traditional recipe. Flaxseed meal, almond butter and coconut flour. I’m a bit hesitant of coconut flour-based recipes though because they can be overpowering and sweet. 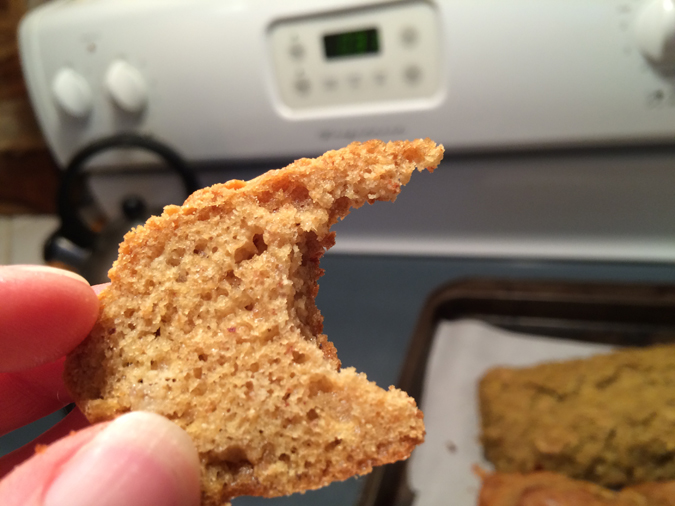 It’s thicker than the last one and without a weird texture. Moving in the right direction!

It is a little on the sweet side though and it didn’t rise very high and it had  a  crackly surface. 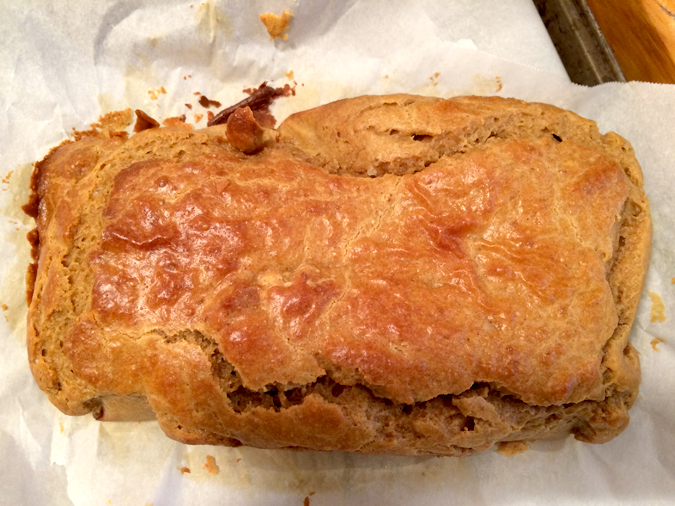 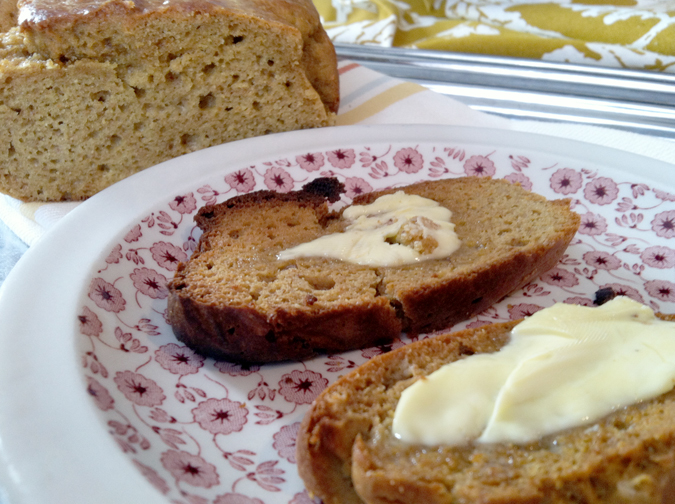 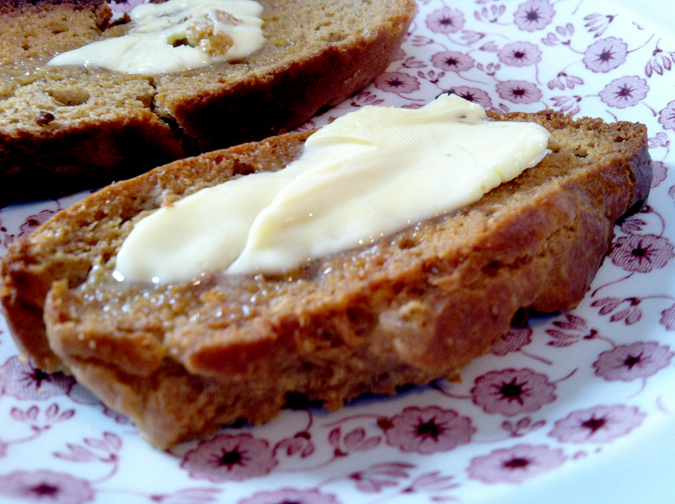 How about some Irish butter to offset that sweetness? Worked like a charm! It’s tangy-ness is the perfect balance. (Nosh nosh)

Still, not worth the hassle to make it all of the time. I can’t ALWAYS douse it with butter.

Third on the docket: a recipe from Guilty Kitchen.  It’s pretty much the same as the last one. But different. 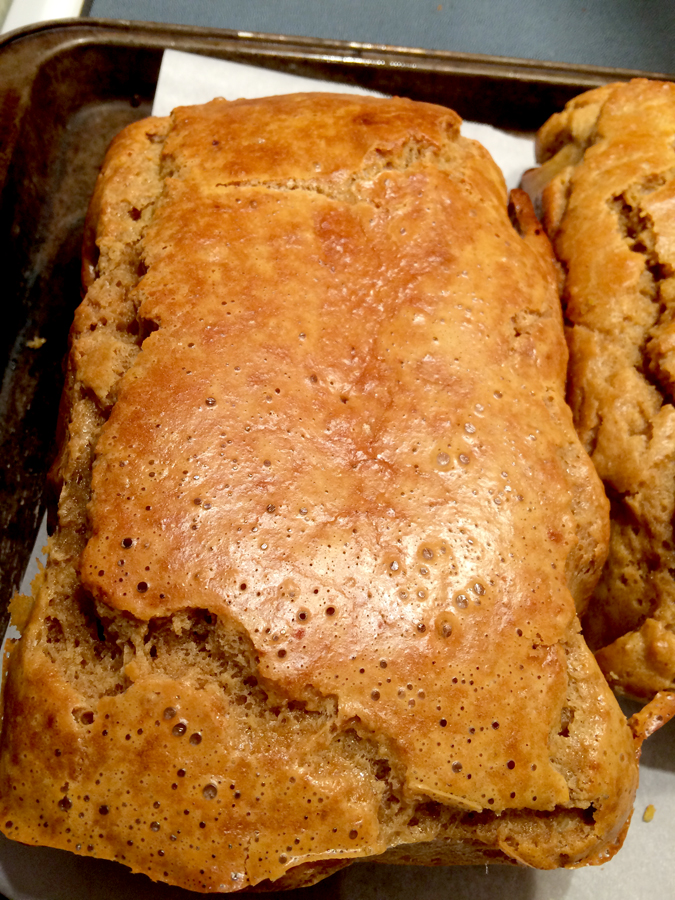 Not as cracked top. A little firmer and a little less sweet. 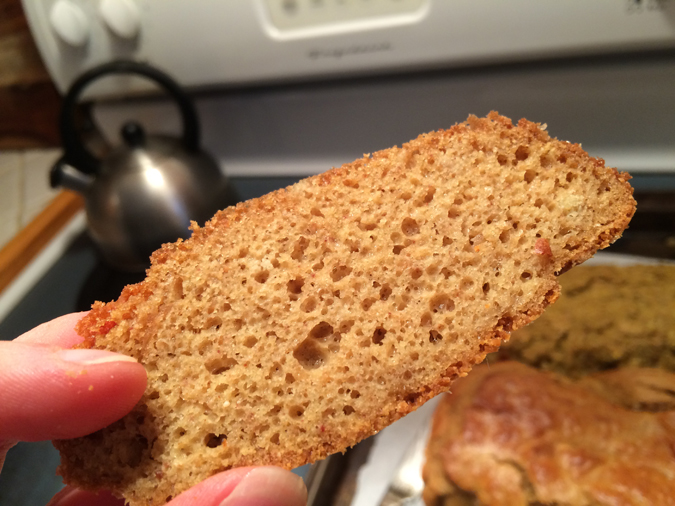 It rose a little higher, too! 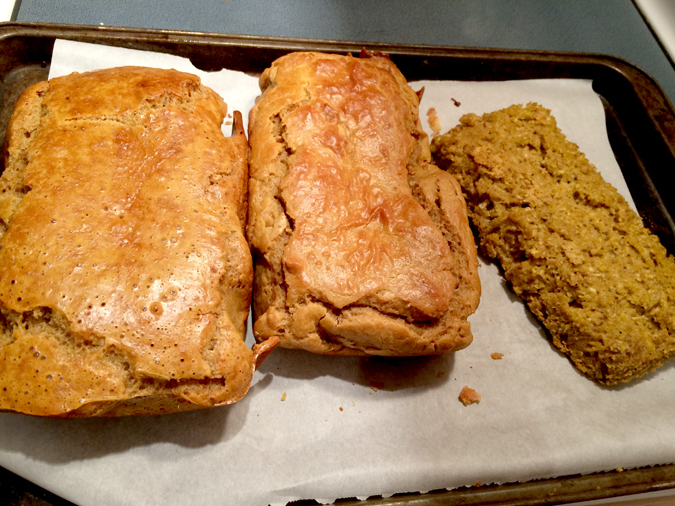 Here’s how the first three stack up in a row. You can tell that the third one definitely has an edge on looks and size. 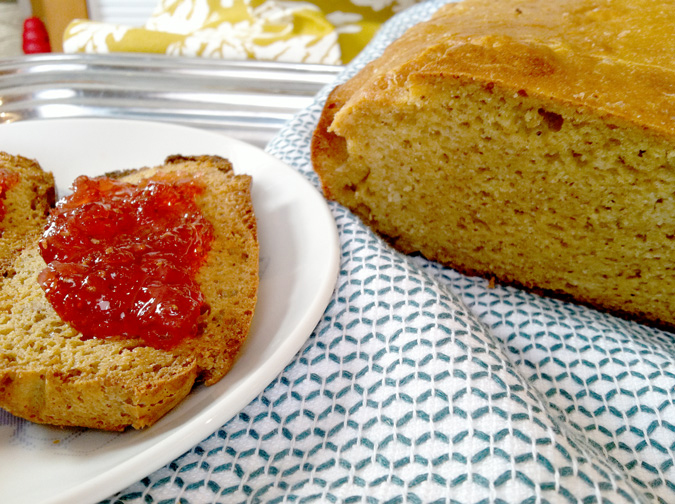 This one calls for some homemade strawberry chia jam! Yum! Divine! This one has top points. 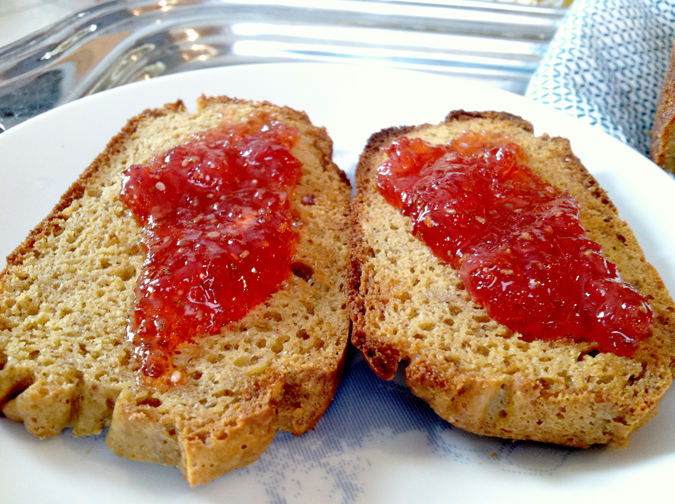 One for me, one for the hubs.

And last on the list: a recipe from The Seasoned Homemaker.  Again, very similar ingredients, but this one required a little more leg work with whipped egg whites and a pan of water.   (Oh, how very long it took to fill a pan with water and stick in the oven.)

It also used milk kefir, which I’d never bought before–because of the whole trying-to-cut-back-on-dairy thing. But, it’s fermented so I bought some. So tart!

A little darker than the others. 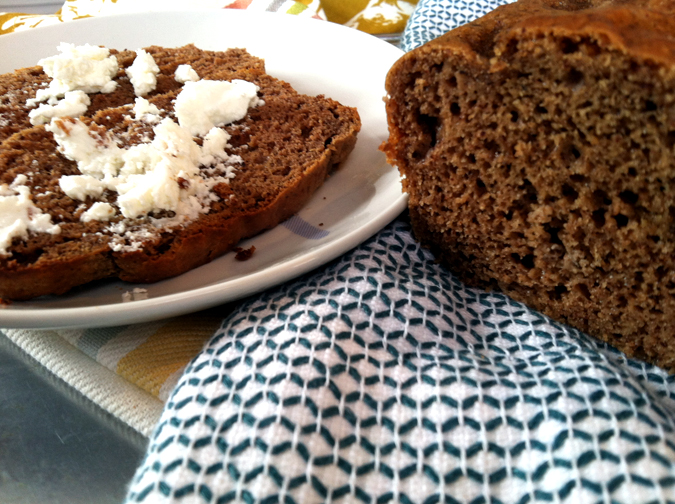 It was a little sweet, so I thought I should add some goat cheese and level it off. Divine!

I think this one would work for non-sandwiches just fine!

But, the third one wins for overall flavor, texture and usability! 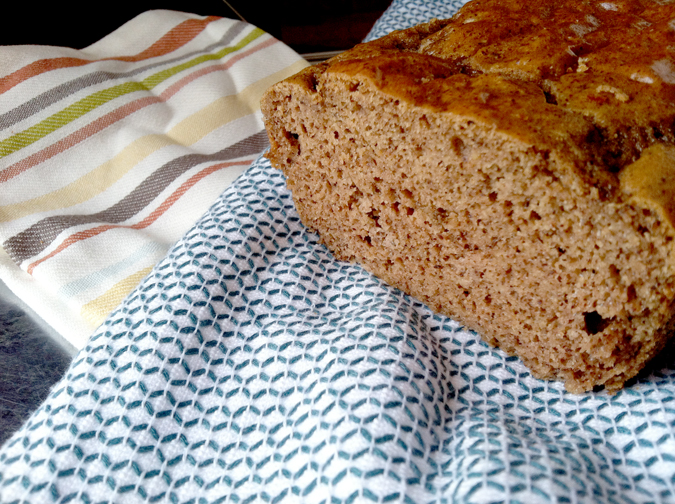 I might attempt, on another weekend, a rice flour-based bread to get even more into the sandwich-like realm, but then I’d be putting a grain in my mouth.

These four (now in the freezer!) will keep me busy for a while though. I’ll be using one of them this week for sure with some tuna salad for my lunches! Yay!

Now, I’m hungry. Maybe I’ll make an extra one for me as a treat for getting my lunches ready.

Anyone have some healthful sandwich bread recipes that don’t call for corn or wheat? Please feel free to share!

Social Media Interaction for the Newsroom